Home      From Carnival to Living Room: A Brief History of Carnival Glass
Spread the love 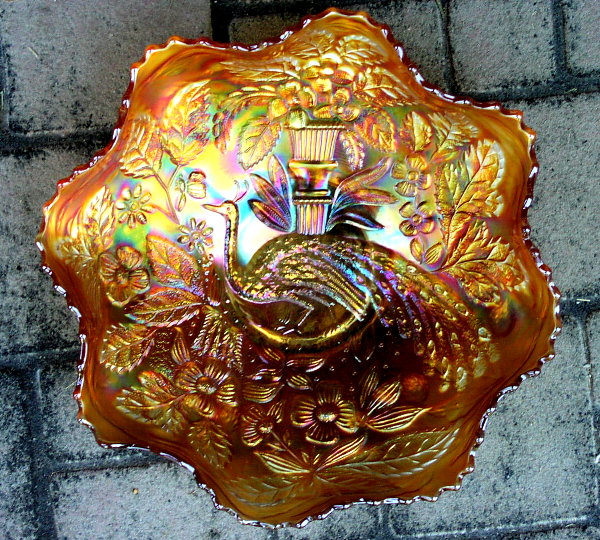 Carnival glass is molded or pressed glass, always with a pattern and always with a shiny, metallic, iridescent surface shimmer. Carnival glass has been known by many other names: aurora glass, dope glass, rainbow glass, taffeta glass, and critically as “poor man’s Tiffany.”

In the 1950s, during its resurgence, it became commonly known as carnival glass, since historically it had been given as prizes at carnivals, fetes, and fairgrounds. Although lots of carnival glass was acquired this way, much of it was purchased outright by housewives looking to add a source of light to their home that didn’t require electricity. It had a way of capturing what little light was available and illuminating even dark corners of a room. It shouldn’t be confused with mercury glass or irradiated glass.

Both functional and ornamental objects were produced with the carnival finish and patterns ranged from simple through geometric and ‘cut’ styles to pictorial and figurative. A wide range of colors and color combinations was used. Scarce colors not part of larger production runs command very high prices on the collectible market.

Some carnival glass is still produced in small quantities. At the height of its popularity in the 1920s, huge volumes were produced and prices were low enough for the ordinary home to afford.

How Is Carnival Glass Made?
Carnival glass gets its iridescent sheen from the application of metallic salts while the glass is still hot from the pressing. A final firing of the glass brings out the iridescent properties of the salts, giving carnival glass the distinct shine it is known for.

How Did Carnivals Acquire Them as Prizes?
Carnival glass originated as a glass called “Iridill,” produced beginning in 1908 by the Fenton Art Glass Company. Iridill was inspired by the fine blown art glass of such makers as Tiffany and Steuben, but did not sell at the anticipated premium prices and was marked down. After these markdowns, Iridill pieces were used as carnival prizes, kickstarting their spread in popularity to an alternative market.

Competition became fierce. New patterns were continually being developed by rival companies. Each company ended up making a wide range of patterns. By selling sample pieces to carnival fair operators to tap into the market found by Fenton, the hope was a winner would go on to purchase further items in the same or a similar pattern.

Iridill eventually became popular and profitable for Fenton, in over 150 patterns. Fenton maintained their position as the largest manufacturer and were one of very few makers to use a red-colored glass base for their carnival glass, a color coveted by collectors. Although Fenton was at the forefront of production, carnival glass was produced in large quantities in the US by Northwood, Imperial, Millersburg, Westmoreland, Dugan/Diamond, Cambridge, and U.S. Glass companies.

Next time you are looking for a piece of nostalgia to add to your mantel or shelf, consider carnival glass! There is a brisk market online and in antique stores for a range of colors and styles that still brighten the dark corners of any home.